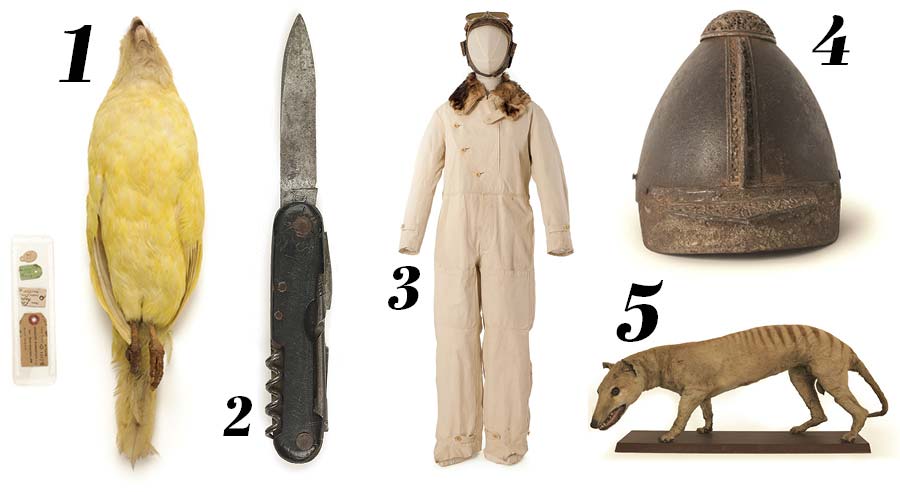 Canterbury Museum’s doors first opened on October 1, 1870, and over the past 150 years its collection has swelled from 25,000 items to more than 2.3 million. To celebrate the anniversary, Canterbury Museum is releasing House of Treasures: 150 Objects from Canterbury Museum Ngā Taonga Tuku Iho, a book showcasing some of the museum’s most incredible artefacts.

There are 69 items from the volume currently on display in the museum – 31 of which (including the thylacine and kākāpō below) are rarely-seen delicate treasures on display for a limited time. Here are five incredible taonga from House of Treasures, and their stories:

Kākāpō are the world’s only living flightless parrots. Once common throughout New Zealand, they are now critically endangered and survive on just three small predator-free islands. Their plumage is predominantly green, mottled with yellow and brownish grey. One specimen held at Canterbury Museum, however, is entirely yellow. “It would be difficult,” said renowned ornithologist Sir Walter Buller, “to imagine a more beautiful bird, although I do not, of course, claim for it more recognition than is due to an accidental variety. It is really a lovely bird and, if I may so express it, of striking personality.”

This kākāpō was captured at Preservation Inlet, near Cromarty, Fiordland, by a group of young brothers, the Bradshaws, and their dog. According to Buller’s account, this took place in December 1895. The boys kept the bird alive in a cage and later their father decided to put the stuffed specimen up for sale. Considering it a distinct species, Bradshaw senior settled on an asking price of £500, the equivalent of about $95,000 today. The specimen remained without a buyer for over a year. It was eventually purchased by Buller’s son, allegedly at a much lower figure. In 1923 Canterbury Museum acquired the Bullers’ collection, including the yellow kākāpō.

Birds are prone to several genetic disorders that affect the colour of their plumage. The yellow colouration of the Canterbury Museum kākāpō is due to a mutation known as ino, in which the synthesis of melanin is markedly reduced, so that the yellow pigments become clearly visible. Ino is more likely to affect females as males must inherit the mutation from both parents for them to appear yellow.

When United States Arctic explorer Robert Peary claimed the North Pole in 1909, Roald Amundsen turned his gaze south, to Antarctica. The Norwegian had been planning an expedition to the Arctic when he heard the news of Peary’s triumph. He continued with his preparations, gathering up two years’ worth of provisions and nearly 100 Greenland sledge dogs, but did not tell his crew of the change in destination until about a month into the voyage.

Robert Falcon Scott had also set his sights on the South Pole, launching an expedition about the same time. Amundsen beat Scott to the Pole by just five weeks, reaching his destination on 14 December 1911. His success was largely due to the dog teams. While Scott insisted men should haul the sledges, Amundsen let the dogs pull the weight.

When the Norwegians reached the Pole they scratched the location – written in Norwegian – and date into various trinkets, including Amundsen’s pocket knife. Dog handler Oskar Wisting carved ‘Sydpolen 14.12.11’ into the handle. The knife also came in handy when the crew needed to make a flagstaff; they sharpened the end of a bamboo ski pole and drove it into the snow.

Amundsen kept the pocket knife, later giving it to his friend Haakon Hammer as a present. Hammer’s widow Obera sold the knife to Canterbury Museum in 1980. Norway is very protective of its material culture; this is one of the few items from that expedition in an overseas institution.

The warlord and the thief

The story of this rare helmet extends from the vast plains of Mongolia, and a renowned warlord, to the generosity of a revered Cantabrian – and an opportunistic thief. Made from intricately designed iron work, it would originally have been inlaid with gold and silver as befitted a high-ranking officer in the armies of Genghis Khan, the Mongol warlord who conquered vast swathes of Asia and even Eastern Europe during the thirteenth century.

After uniting the disparate tribes of Mongolia under his rule in 1206, Genghis Khan embarked on a series of campaigns to conquer neighbouring lands and defeat rival empires. Over the following 20 years his armies took over all of China, Korea, Central Asia to the north and west of the Himalayas, the Caucasus and Eastern Europe as far as Kiev. Genghis Khan is remembered as a brutal military commander, but he was also a hugely influential leader. He introduced the first Mongolian code of laws, decreed a single script to ease communication and brought the Silk Road trading route under unified political control for the first time. He is revered by Mongolians today as the founder of their nation.

This helmet is part of a significant collection of Chinese and other Asian arts gifted to Canterbury Museum by New Zealand writer and social reformer Rewi Alley. Alley was born in Springfield, Canterbury, but spent most of his life in China. The helmet was stolen in February 2000 by notorious art thief Peter Whitworth but returned to the museum 10 days later, after the culprit was caught.

Once was a tiger

The story of the now-extinct thylacine or Tasmanian tiger is a tragic part of Australian natural history. A carnivorous marsupial with the appearance of a dog, the thylacine was regarded with curiosity and eventually persecuted as a supposed pest. It was thought to prey on sheep and poultry, though this was very probably exaggerated. Farm owners placed bounties on the animal as early as 1830 and in 1888 the Tasmanian government offered £1 for every full-grown thylacine destroyed. This fast-tracked the destruction of the wild population and by 1909, when the bounty was withdrawn, sightings were rare. The last known thylacine died in captivity at Hobart Zoo in 1936, just 59 days after the species was added to the list of protected wildlife.

There are only around 800 known thylacine specimens held in 116 museums and university collections throughout the world. Canterbury Museum has four of these: two skulls, a complete articulated skeleton and this mounted skin. One of the skulls was acquired in exchange for a kiwi egg in 1932, before its impending rarity was recognised.

The significance of the thylacine story is marked in Australia on National Threatened Species Day, 7 September, which commemorates the death of the last known Tasmanian tiger.

Lady Constance Stewart was one of New Zealand’s first female aviators. She gained her private pilot’s licence in December 1930, the same month as Jean Batten, who is often described as this country’s greatest aviator. In these years aeroplanes were still uncommon in New Zealand; it was even more surprising to see a woman flying an aircraft.

These overalls were made for Lady Stewart by Hallenstein Brothers, one of the South Island’s oldest and most respected businesses. They are designed for practicality – the canvas with wool lining, for example, provided much-needed warmth at high altitudes – but fashion, too, was clearly taken into consideration. The rabbit-fur collar was a statement of taste, although it no doubt helped to keep Lady Stewart warm during flights.

Lady Stewart lived at Pigeon Bay on Banks Peninsula with her husband, Sir Bruce Stewart. The couple had an airstrip built on their property and Lady Stewart would often fly to Christchurch, Blenheim and even the North Island from her home.