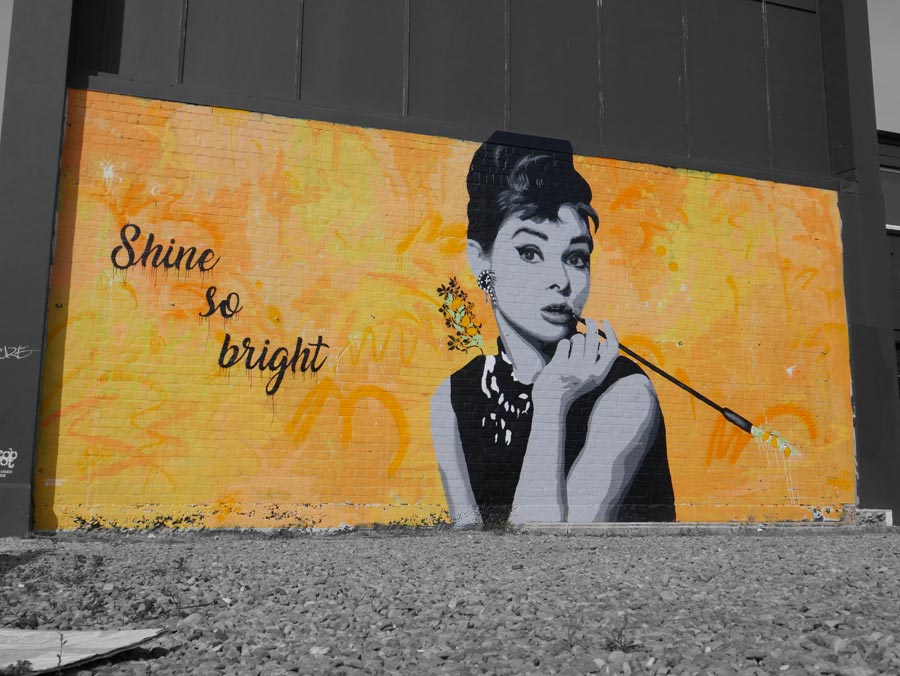 Tell us a bit about your Audrey Hepburn mural – why Audrey?

The Audrey Hepburn mural I designed to bring a bit of colour pop and inspiration to the corner of St Asaph Street and Manchester Street. I wanted to paint Audrey as she is a well-known figure in history, known for her glamour, acting, and what stuck out to me is that she was a major humanitarian. She was out to help improve the welfare and general happiness of people. I found that this made her really fitting for the subject of my mural because I really love to try inspire people to be happy, keep their heads up and ‘shine so bright’.

What’s the story behind the vibrant yellow? I chose yellow as it is generally associated with happiness and joy, which is the main point of this mural.

And the message, ‘Shine so bright’? With a lot, if not all of my art I love to put quotes on them to match the mood of the painting. With this one I really wanted the painting to be happy and uplifting, so I spent a while going through quotes, listening to music and watching movies to try and pull out anything that gave me that 'feel good' feeling. So in the end I found ‘Shine so bright’ which I feel is a motivational and uplifting quote that most people would be able to connect with and hopefully take something from.

How did you get into creating street art? I got into making art when I was 17. I was really into graphic design and all of that but the thought of office work was pulling me away from it. Later that year I went on a family holiday to Los Angeles where I saw street art and amazing galleries everywhere, which gave me inspiration to have a go at it when I got back home. From there I just invested all my time into it, practicing and trying to further myself so I could one day make a career out of it.

What was the first bit of street art you created, is it still there, and was it any good? The first piece of street art I made was a single layered stencil of Han Solo from Star Wars on a tiny electricity box on the corner of Madras Street and Edgeware Road. It was awful. I went back a few months later after I'd gotten a wee bit better and painted Marilyn Monroe which is still there today. It’s pretty cool to drive past it sometimes and see how far I've come since then.

Tell us about a piece of street art that’s inspired you. One piece that I can think of in Christchurch was Owen Dippie’s Elephant mural on Manchester Street. I'm not sure why, though, I've just always admired the animals since a young age so I guess seeing them around in my home town is pretty cool.

How does your process work? An idea can come at really strange times, like I could be walking down the street, be at a party or anywhere that's really inconvenient and think of something that would look cool and have the deeper message I try to portray on walls or in my canvas work. This is why I've now started going everywhere with a tiny notepad and pen, so if I do have an idea I can quickly scribble it down and get back to it at a better time. Usually I'm contacted by building owners that want me to have a crack at brightening up their walls, but if there's one that I have an idea for I'll design up a concept then go and get in contact with the owner to see if they'd be keen for me to paint it.

Talk us through the piece you’ve done in Christchurch that you love the most. I think my favourite at the moment would be the Shine so Bright mural, but every time I paint something new, it becomes my favourite. This, I think, is because every mural I do, my detail starts getting more intricate and I just keep pushing myself to make my next mural better than the last.

Where’s your favourite place to go in Christchurch for a:

Morning coffee? I don't actually drink a lot of coffee, but my favourite café would have to be Lemon Tree.

Post-painting beer? If not just going to mates’ flats and cruising there, I'd go to The Avonhead Tavern.

Hit of creative inspiration? Being with friends, going to the movies and especially just driving around pointlessly tend to give me the best inspiration. Or, most annoyingly, when I wake up at 3am with a new idea for something.

What’s the best piece of advice you’ve ever been given? I'm not sure if this is good advice, but it's something I tend to tell people: I think that people can do whatever they want in life. If you have a passion for something, the only thing that will stop you from making it happen is yourself, and listening to others’ negativity. A lot of people tell you that there's a 'correct' way of living life and that you should stick to that, and I know a lot of people listen to that advice. You've only got one life, so don't waste it doing something that other people expect you to do. Be you.